Formed in 1961 with 55 members, the Littleton branch of the American Association of University Women (AAUW) received its charter in 1962 and membership climbed over the next two decades to nearly 150. This was not only the first suburban branch in Colorado but also one of the first in the US. Writing about the early years of the organization, branch historian Carol Neumann wrote in 1975, “Receiving our charter was the beginning of our branchʼs special responsibility to our society by those who have enjoyed the advantage of higher education.”

These founding members took their mandate to advance equity for women and girls through advocacy, education, philanthropy and research very seriously. They established an interest group on the ʻStatus of Women,ʼ became sponsors of “The Friends of the Library” and worked to help get a bond passed for a new library, aided in a drive to launch educational TV on Channel 6, supported a bill to establish the Metropolitan State College, and addressed topics such as ʻComputers and Destinyʼ and ʻLadies and Peace in Space.’ In 1965 they distributed their first scholarship booklet to Colorado high schools and libraries, while the following year members introduced Green Circle programs in local schools – the program, based on the “the Brotherhood of Man,” was designed to foster multi-cultural understanding in the classroom. As the 1960ʼs drew to a close the branch deepened its involvement with Arapahoe Community College by opening a Womenʼs Resource Center and continuing to raise funds for scholarships.

Raising funds for scholarships, supporting the Green Circle Programs and hosting Youth Awards Teas continued through the 1970s. The compilation of a recipe book, for example, raised $1700 for grants and fellowships. But change was on the horizon, both in the broader economy and within the branch. The recession of the early 1980s saw an increasing number of women returning to full-time work – a development that would go some way to help achieve AAUWʼs goals of greater equity for women. But, ironically, the impact was seen in a declining branch membership as many of the women now working outside the home had little time for community involvement. Membership was also impacted by the spin off of a group of members who formed the Chatfield branch. To counter these changes and to encourage more suburban women to join the organization, the name was changed to the Littleton-Englewood branch of AAUW. The branch continued to focus on community outreach – reading in nursing homes, establishing new scholarship funds, working for Library Without Walls – and in 1988 hosted the AAUW of Colorado Convention.

The branch’s focus in the 1990’s was on mentoring middle-school girls. Members were paired with students and visited women professionals who had chosen to work in nontraditional fields. This program expanded into Great Goals for Girls – a one-day conference with workshops for 6-8th grade girls, designed to expand their awareness of non-traditional career opportunities. By 2003 the branch co-sponsored with Arapahoe Community College the “Expanding Your Horizons” program. Once again targeting middle school girls and their parents, this program provided hands on workshops in the STEM subjects (science technology, engineering and math) in the hope that larger numbers of young women would continue with these subjects in high school and college. The branch remained involved in this project and sent volunteers to help the Boulder branch host the conference at the University of Colorado.

In the early 2000’s, the branch initiated a Book Bags program at Sheridan Early Childhood Center (formerly Head Start), which thrives today. The program provides books to low-income, multi-cultural, pre-school students. Each week, students are given bags with 4-5 books, which they return weekly, and awards are given to classrooms for the total hours parents read with their children.

The branch name was changed to Littleton-South Metro in 2011 to better reflect the suburban development to the east and south of Littleton. The branch committed to focusing on deepening community involvement. In 2014 Littleton High School introduced a “STEM Certification Program”, and the branch has provided support and scholarships to participating young girls since its inception. The branch sponsored Temple Grandin’s 2015 appearance at Littleton High School, enhancing visibility of both women in STEM and AAUW. 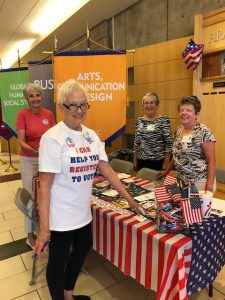 The Branch has collaborated with the League of Women Voters to support voter registration.

Branch philanthropy expanded to Sheridan High School in 2016 sponsoring girls’ attendance at INSPIRE, a leadership skills workshop  at CSU. Since then the support to Sheridan HS has grown to include scholarships and provision of personal care items and school supplies for students.

The Branch continues to have a dedicated membership, giving freely of their time and resources to further the aims of AAUW.  Members eagerly support multiple fund raising activities for AAUW and local community projects. Vibrant interest groups provide for member educational and social activities, helping to engage members in all branch activities being invaluable in maintaining communications with branch members during the COVID-19 time period.

Reflecting on our 50 plus-year history we are proud of the accomplishments of those charter members whose advocacy work helped shaped our community and whose interests were on the cutting edge of science and technology. They will continue to inspire us. 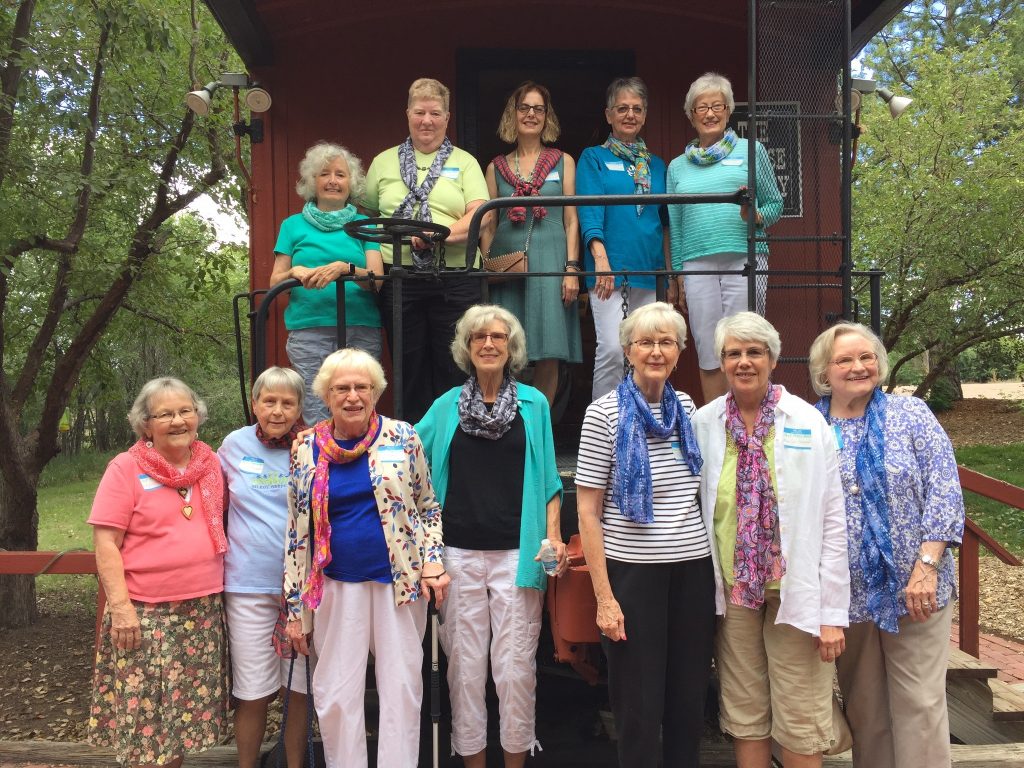 Past and current AAUW Littleton-South Metro presidents were honored at a party at the Depot Art Gallery in Littleton on Sunday, August 13, 2017.